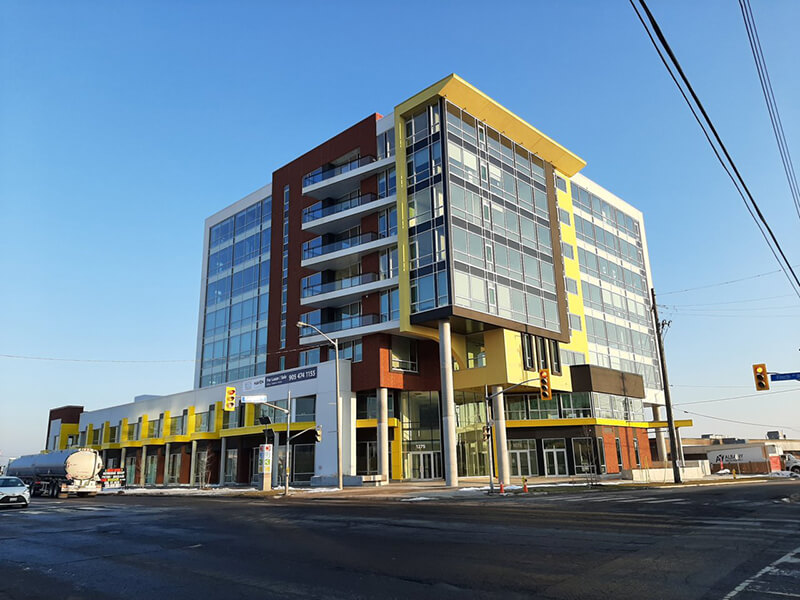 The University Heights Professional and Medical Centre, a redevelopment of a commercial property on Finch at Keele, is nearly complete. Spurred on by transit improvements in northwestern Toronto, including the recently-opened Finch West subway station and the coming Finch West LRT, Haven Developments and Union Capital Management’s 8-storey, 180,000 square-foot, ACK Architects-designed office-condominium development will soon be opening. Ground breaking was celebrated in September 2015, and crews are now on the home stretch.

A few months of site clearance paved the way for the start of the project’s shoring phase in early 2016. This was followed by the start of excavation that same spring. By May 2017—the time of our last update—a tower crane was in place and the start of the building’s foundations were being formed.

In the two years since, the building rose to its final 8-storey height, and a variety of cladding materials in bold colours now enclose the entire structure.

As crews complete the building, signage has been installed for the first confirmed retail tenant—a new Tim Horton’s location with both pedestrian and drive-thru access. Another major feature awaiting tenants of the new building is the 10,000+ square foot open-air green roof that will be accessible from the third floor.